Lots Happening in the World of Running Lately

On April 2nd I ran my first parkrun 5km. I ran with Kitty from ‘On The Road Again’. She hadn’t been running for a while. I was just happy to get out for a run and see what the parkrun course was like. 105 people running 5km at 9:30 on a Saturday morning is a great sight.

Parkrun has been all over social media for the past few days. Although it is a free event in hundreds of locations around the world the council in Little Stoke have decided to start to charge people for the use of parks for parkrun. Its still early days in this development and hopefully it won’t open the floodgates and mean that other councils start to charge to take part in such a great event.

On Sunday I was doing post event massage at the Connemarathon. Weather conditions were pretty wild and every athlete that took to the course was well tested.

I lost count of the amount of leg massages I gave. There were men and women from France, England, Dublin, Tipperary, Clare Island, Clifden and other parts of County Galway.

I’ve never seen this side of a marathon before. There were a few people with hypothermia and the medics on duty were kept busy for most of the day.

Having completed this marathon 3 times I was able to talk to some of the runners I was working on. Some of them had also completed it a number of times.

I was telling one man of my plan to run the ultramarathon next year. I’m going to see what kind of mileage I can do over the summer.

On Friday evening Gavan Hennigan is giving a talk in French Vanoli gym. I’m looking forward to it. Gavan has been on two serious expeditions since I last spoke to him.

It has just been announced that four – time Ironman triathlon World Champion Chrissie Wellington will be taking part in Challenge Galway in June. Its a huge endorsement for the event.

This photo popped up a couple of days ago. I had to consult Jimmy Magee to work out what race it was. Monivea Half Marathon June 2013. The warmest half I have ever run in. I’m not sure if i’m going to run it this year. 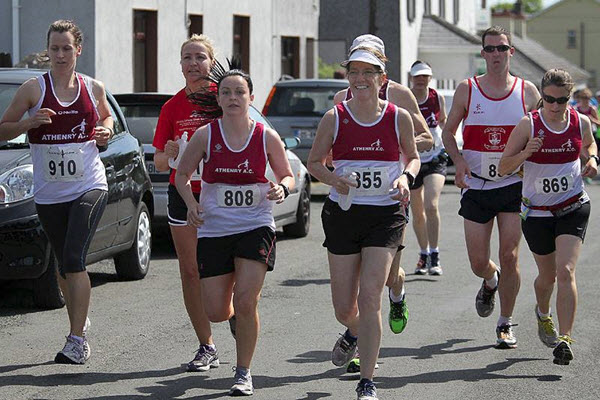 I have a couple of interesting races coming up and a few other events in the pipeline.

If you are interested in attending my running workshop please get in touch.