Its Not Supposed to be Easy!!

A couple of weeks ago I received a text message from Paul who I’ve cycled with as part of Galway Visually Impaired Activity Club. The Galway Blue Challenge is on at the end of May and the chosen charity is “Irish Guide Dogs For The Blind”.

The challenge involves cycling from Salthill to Croagh Patrick via Connemara. On reaching Croagh Patrick you then scale the summit. The following day you cycle back to Salthill. It didn’t take me long to decide to sign up for the challenge. 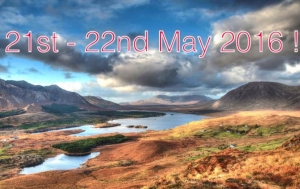 The launch of the Galway Blue Challenge was held in the newly opened Galway Plaza in Kiltullagh.

Paul wasn’t sure if he was going to take part in the cycle but once he heard I would pilot the tandem bike he decided to sign up. I reckon with a bit of training we should be well able for the cycle.

The CEO of “ Irish Guide Dogs For The Blind” spoke of the work the organisation has done over the past 40 years. It was interesting to hear that they also provide dogs to children suffering from Autism. It costs E38,000 to train one guide dog and it is hoped to raise at least this amount through the challenge. If you are interested in taking part please visit www.galwaybluechallenge.org

I’m still breaking in my new runners. Two weeks ago I cut the back of both heals and had to take it easy for a few days.

I took it easy last weekend as I’d had a busy week. On Monday I was ready to go. My legs were feeling fresher than ever as I clocked up 8.4 miles. The plan was to run 13.1 miles on Wednesday.

Tuesday morning I woke up to the sight of a new watch from Garmin as my old one had stopped working after 11 months. Any excuse to go for a run.

I headed out the road to Bearna having not run this route for a couple of weeks. About ½ mile from the end of my run I could feel friction in the side of my heel. It felt like I had been stabbed.  Things weren’t looking good for my 13.1 mile run.

Wednesday morning I was straight into the pharmacy for some blister plasters. I felt like a new man.

I had my route in mind. Got my gear together and grabbed a headtorch in case it was dark on the way back.

I stepped out of the car and felt pain in my heel. This wasn’t good. I ran down the road in the hope it would ease up. 200 metres down the road and i’m in agony. I stopped and took off my runner and noticed blood staining my white sock. I peeled off my sock. The blister plaster had disintegrated. I tried to salvage it. I was feeling good for another 200 metres but then the pain came back. There was nothing more I could do other than return to my car.

My first thoughts were that I was coaching a group from “On the road Again” on Thursday and I have a 10km in Coleraine on Saturday. Time to rest up.

Last Sunday Emer and myself were doing post race massage at the Craughwell 10 mile race.

It was an ideal day for racing and it was great to see Matt Bidwell first across the line in a time of 52:56

It was my first time doing post race massage at an event and I learned an awful lot.

It was great to see so many Galway clubs represented with the men and women of Galway City Harriers getting some great results. “On The Road Again” and Team Manuela were also represented.

I was talking to a few people who had travelled from Sligo and Dublin for the race. It was good to know that I’m not the only person who travels to the other side of the country for races.

It was also good to see the winner of the Female Over 70 category collect her prize.

My next running workshop is on Wednesday April 6th at Westside track. If you are interested please get in touch as places are limited.

The clocks are going forward at the weekend and the evenings will be getting brighter. Now is the time to dust off the runners and the bike and set yourself a new challenge.