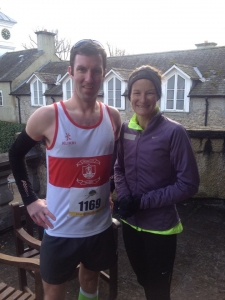 I’ve been putting in the miles over the past couple of days and I hit the 300 mile mark yesterday afternoon – so taking it easy for the next two days as I have my first half marathon of the year on Saturday morning in Kinvara.

Earlier in the week I went out to Sean in ‘Amphibian  King’ for a new pair of runners. Sean is a keen runner and adventure racer and he really knows his stuff when it comes to the right footwear.

I’ve been focusing a lot on what races I’m going to do this year. My main aim is to go beyond 50km and to also focus on the 9 counties I haven’t run in. I reckon I should tick 4 or 5 of them off the list.

I signed up for a challenge with  www.goactiveireland.com/run32

This week, Cradock Performance hosted an evening with Sonia O’Sullivan. My cycling buddy Breifne Earley was MC for the evening and it’s safe to say he did an amazing job.

Maev Creaven started the evening by giving a talk on nutrition. I think most people were curious to know what the best breakfast for runners were!  Greg Muller the former coach of the Auckland Blues spoke thoughtfully, about the importance of recovery and living in the moment when it comes to your own training.

Eimear Cradock is a physiotherapist who has just returned to Ireland having spent a number of years working with the Australian Kayak Team and she gave a great talk on the amount of work that goes in to qualifying for a world championship or Olympic games.

She also talked about the problems that people encounter from sitting at a desk all day which can be bad for your posture with people hunched over desks and computers leading to sore necks and shoulders.  Eimear gave some great tips on what you can do to prevent this kind of damage if your profession involves you sitting at a desk for a long period of time.

The star of the evening Sonia O Sullivan took to the stage to a huge round of applause.

Breifne had his homework done. He asked her about growing up in Cobh, her early running career, college life in America and her time at the Olympics. The Q and A session afterwards was also very interesting with some of the younger members of the audience coming up with some great questions – Sonia has great presence!

The last time I met Sonia was after a 10km race in Kilkenny in 2014 where she graciously took time a for a photo;

There is still plenty of time to vote in ‘Best of Galway’ Awards  www.bestofgalway.com

I will be starting ‘couch to 5km’ training in a couple of weeks.

Anyone interested in taking part in  ‘Tough Mudder’ ‘women’s mini marathon’ or any other events please get in touch.