Will You Rise to the Challenge?

A couple of things Gerry Duffy mentioned caught my attention.

He had asked the room if we wrote down our goals.

It got me thinking. I don’t actually write my goals down anywhere.

He suggested writing them down and having them somewhere visible around the house to remind us of our goals. He also suggested putting up a photo of somebody who inspires us. I get inspiration from so many people so this one had me puzzled for a while.

I had planned on getting up early and going for a run as I was going to the talk straight from work. This didn’t go to plan. Sitting listening to 4 top athletes and adventurers was giving me all the encouragement I needed to go for a run at 10:30 p.m.

I ran in the door and through my running gear in the dryer for a quick spin.

I wasn’t long consuming a glass of water, 2 chocolate digestive and a pancake before I got out for a quick 3.5 mile run.

As I sat down afterwards it struck me. Tom Crean (Antarctic Explorer) is the man who inspires me the most. I have seen hundreds of photos of him. I even stopped off in his pub ‘The South Pole Inn’ on the way to Dingle Marathon in 2013. 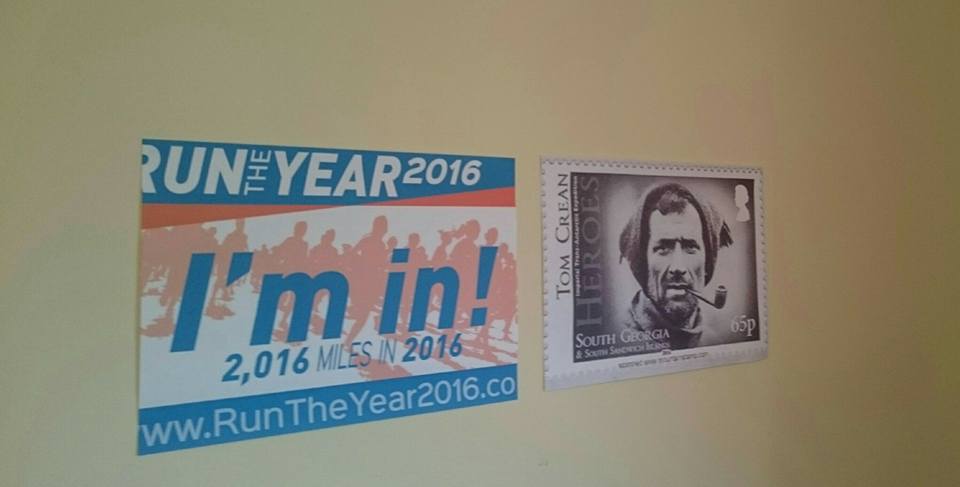 I did a quick internet search to see what photo I would use. I was nearly going to use the iconic image of him standing with 4 puppies in his arms but then I spotted the image I have chosen.

In 2014 South Georgia Island commissioned a set of stamps to commemorate the 100th anniversary of the Imperial Trans Antarctic Expedition led by Ernest Shackelton.

Lent is fast approaching. This is the second time during the year that people give things up for roughly 40 days in the hope of getting in better shape.

As I have said many times in the past I don’t believe in giving things up I think it is far better to take up a challenge and make some lasting changes.

I plan on doing more resistance training over the next month than I have been previously doing.

I also want to do some more leg work to see how it can benefit my running.

This is a list of things I would suggest you try.

If you drink a lot of coffee try to cut down by drinking more water.

Why not try a 30 day squat challenge. Great way to build up the glutes and quads especially if you are into running.

Plank challenge. Get your core in better shape.

How about being more mindful.

Turn off the tv and read a book.

Do something you’ve been talking about doing for a long time.

This is my Lent Challenge to you. If you attend 6 Circuit Classes between February 10th and March 24th you will be entered in a draw for a free Running Workshop for you and a friend.