If it’s Worthwhile it Won’t be Easy

I suppose I was on  a bit of a high after passing the 100 mile mark.

All the hours on the road were starting to pay off and it wasn’t long before I passed the 200km mark. I was conscious of the fact that I have only had one week where I have achieved my target of 38.5 miles.

With the end of the month approaching I have been looking at achieving my monthly target and with a bit of effort on Sunday and Monday I should pass this target.

I had a reasonably good turnout with a lot of interest for my next workshop on February 6th. This course is aimed at people of all running abilities.

If you are looking to get faster at running 5km but are having difficulty with your breathing I can show you a technique that will improve it.  If you are curious about running a half marathon or full marathon there is plenty of advice I can give you.

On Sunday I attended a volunteer fair with ‘On The Road Again’.

It was great to talk to so many people and tell them the benefits of exercise, not just for your physical health and also your mental health.  I was surprised that the youngest people I was talking to were the only ones to come up with excuses. I will be taking to the catwalk on February 6th in The Radisson for a fashion show in aid of ‘On The Road Again’. 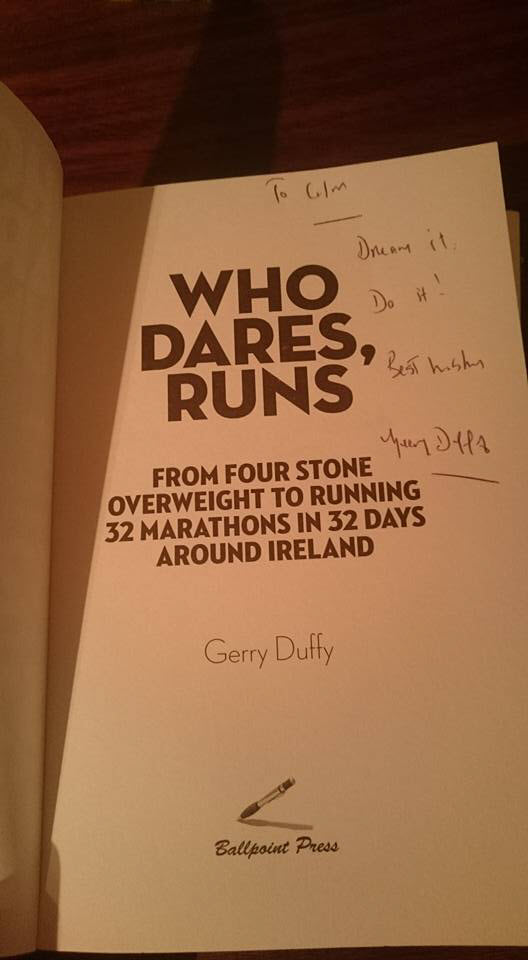 Listening to Gerry Duffy talk is always amazing. You wouldn’t know what nugget of information you’d come away with. I was also curious to hear Gavan Hennigan since I hadn’t spoken to him since we climbed Croagh Patrick with the Nepalese Sherpas and I wanted to wish him well on his journey across the Yukon Artic which he will start next week.

Kevin Thornton is a professional triathlete. He finished 3rd in Ironman 70.3 Dublin despite puncturing his bike. I have been following his story on social media but I have never heard him give a talk.  He spoke about motivation and he mentioned the fact that there are days when he has to push himself out the door to get his training session done.

It was good to know that even professional athletes can be lacking in motivation from time to time.

Ray O’Connor gave an interesting talk on his running career. There was some comedy element to it but I think the point he was making was that if you don’t have a plan or a goal set out you will struggle to work out where you are going and why you are trying to go there.

Finally Gerry Duffy took to the stage. It wasn’t long before he had us moving from our seats and swapping seats with the people on the opposite side of the room with his reasoning being that you need to be able to get uncomfortable to achieve your goal.

I have heard Gerry talk 7 or 8 times in various locations around the country and he never fails to deliver.

The man has run 32 marathons in 32 counties in 32 days, completed 10 full Ironman races in 10 days winning the event – The thing I admire about the man is his encouragement towards other people.

During the Deca Ironman  a female competitor was struggling to stay awake on the cycle section as she had finished a lot later the previous day than the other athletes.

Gerry met her in the middle of the road. She was asleep on her bike on a quiet road that wasn’t closed to traffic. He advised her to have a quick snooze outside a café nearby. Unfortunately for this lady the race organisers disqualified her on safety grounds..

When I was taking part in Cycle Against Suicide Gerry spoke in Castlebar and the following day in Sligo and although he was offered a hotel room he declined the offer.

I’ll always remember cycling from Enniscrone to Sligo town. Gerry had pulled in at the side of the road and was cheering us on. It was a small gesture but after cycling 100km a day for 8 days it meant  a huge amount.

Gerry asked us last night if we write down our goals. A number of people in the room raised their hands. It got me thinking. I don’t actually write down my goals anywhere.

He advised us to write them down and display them somewhere that we would see them on a daily basis. He also suggested we put up photos of someone who inspires us.

This was a tricky one for me. I get inspiration from the strangest of places.

I have been lucky enough to meet so many sporting greats over the years along with ordinary everyday people who set extraordinary goals and then go out to achieve them.

This week I would suggest that you go out and do something different.

Anything at all. Something that challenges or changes you.

Dates for the diary: