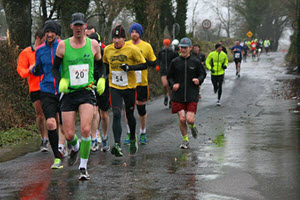 Sebastien Locteau is a professional endurance coach and in January 2012 he was looking for runners who wanted to achieve some specific goals.

I was interested in running beyond the traditional marathon distance and so I eagerly signed up to his online training programme. The was a 50K race in Portumna the following June – ten laps of a fairly flat 5k course.

Seb sent us training plans tailored to our specific goals and each week we would post times and distances from our training spins.

Over the next couple of months, I raced a variety of 8 & 10K events, also taking in a ten miler in Craughwell and Half-Marathons in Kinvara, Ballybunion and Inishbofin.  All these runs were designed to ‘get miles in the legs’.

Two weeks prior to Portumna, I consulted Seb and he suggested two long runs on one day to experience fatigue. I got out on Monday and Tuesday for 8 & 10K runs and planned my double run for Thursday.

Thursday came and the weather was poor – a steady drizzle and certainly not ideal for two long runs, so I postponed.

The following morning I set off down the Salthill Prom on my first leg – 14 miles in 2 hours – I allow myself a three break to refuel and rest, which on reflection seemed like only 5 minutes. Back on the road, it was a case of counting down the mile markers – clocking up 11 miles in an hour and 40 minutes.

I was pretty much wrecked after my duel run and spent the weekend resting, while the next couple of weeks prior to Portumna would be spent with a series of short runs to keep ‘ticking over’.

Race day arrived, I did my usual warm up routine – the 100k guys had set off at 6.00am and so there was a fair amount of activity as the normal marathon was starting two hours after our race.

As I said, we were racing ten 5K laps and that was tricky to get used to at first, but I soon settled in to clocking up the laps. My ‘wall’ came after eight laps – stomach felt dodgy and perhaps a bit dehydrated – I just wanted to go home!

I stopped! had a serious chat with myself – was the last six months for nothing? why did I get up at 5.30am?

Crisis over; I quickly got back to running – telling myself that ‘mind over matter’ and keeping the head down might see me home in under 5 hours. On the final lap, I now knew where exactly to give that final push, “leaving nothing on the road” rounded the last bend and finished in 4′ 58″. I was elated and actually felt like I could do another lap – “The power of the mind”

Running the 50k distance gave me renewed confidence for the traditional marathons – there are plans for some Ultra Running in 2016!