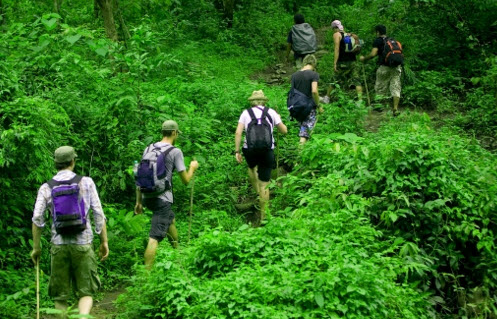 I tend to get attracted to challenges when I read the newspaper and magazines! and in September 2004 I saw an ad in a newspaper for a charity trek in Brazil!

Brazil was on my bucket list and  I jumped at the chance to do it.

I had been doing a good bit of hill walking over the previous 2 years so the training wasn’t a huge problem. The next couple of months were spent in the hills of Connemara and Co. Clare along with some resistance training sessions in the gym.

The trek was through the national park outside of Brasilia. and took place in the first week of June 2005. The weather was pretty good considering it was winter in the Southern Hemisphere.

The scenery was spectacular. On a few occasions we were walking through forests which kept us cool. I had previously trekked in South Africa and the temperatures there had been quite high.

The wildlife included birds of prey, a rattlesnake that we walked past on the second day and some butterflies that were the most amazing blue colour I’ve ever seen.

We also had the added bonus of being able to swim in the waterfalls we passed every lunchtime,  camping out with evenings were spent  around a campfire.

Trekking may not have the same ‘explosive demands’ that say Marathon running or Triathlon have! It does however demand an attention to detail and dedicated preparation – this is where the worlds of trekking, marathon and triathlons collide.