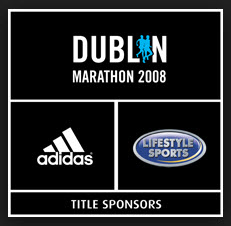 In early 2008 I was looking for a new challenge. I hadn’t been as active in previous years as I would have liked, my working hours were fairly unsociable and my diet was far from healthy.

My Dublin Marathon adventure started one Saturday in March while reading an article in the sports section of ‘The Irish Times’. Johnny Donnelly, of Saw Doctors fame, was going to run a Marathon a month for the next 4 years – wow! and at the end of the article there was a list of the marathons he would be running.

The Dublin marathon was listed for the end of October.

I was confident that my endurance levels were fairly high and that with enough training I could complete the 26.2 mile distance.

First off; I changed jobs with a slightly more sociable schedule and my diet also became a lot more healthy. My meals throughout the working day became very important especially on the days I was working as I would go out for a 10km run as soon as I got home.

I signed up for my first 8km race – the Streets of Galway Race was on at the start of August.

The first couple of training runs were pretty tough. I was doing well to run 500 metres without being out of breath, but I was determined to complete the 26.2 mile distance.

Next on the agenda was entry into a couple of 10km races.

The week of the Marathon wasn’t long coming around. I met Johnny on the Friday and we had a quick chat about how my training was going. Johnny knew I was determined to finish. He told me not to worry about what time I ran as “all the medals were the same colour”.

I went up to Dublin on the Sunday, collected my race number, checked into my hotel and tried to relax for the afternoon.

I was pretty nervous and went for a walk. Down around Pearse Street I saw a billboard that said “ You can spend your whole life wondering if you can run a marathon or knowing that you just have” – prophetic words I thought

Although sleep was sporadic, I was up early for breakfast and made my way to the start line at Merrion Square where I met up with a few people I knew for some nervous pre-race chatter.  Johnny was also at the start to offer some reassuring words.

The gun finally sounded we were underway. I tried not to think too far ahead and keep it in 3 mile blocks.

The support was huge as we made our way towards the Phoenix Park.

The miles were racking up 16,17, still focusing on my 3 mile block plan. Passing the 20 mile mark we came up the motorway and passed the R.D.S where we had collected our races numbers the previous day. On through Ballsbridge the support from the crowds was uplifting.

Back in to the city centre. The numbers on the mile markers were getting bigger and when I finally turned the corner on to Nassau street and kept the legs moving looking out for that finish line. One last corner and there it was 100 metres ahead, I gave one last push and crossed the line in 4hours 5 minutes.

Within 1 month of completing my first marathon I had signed up for Connemarathon the following March where despite the last 13 miles being uphill I ran 4 hours 2 minutes.